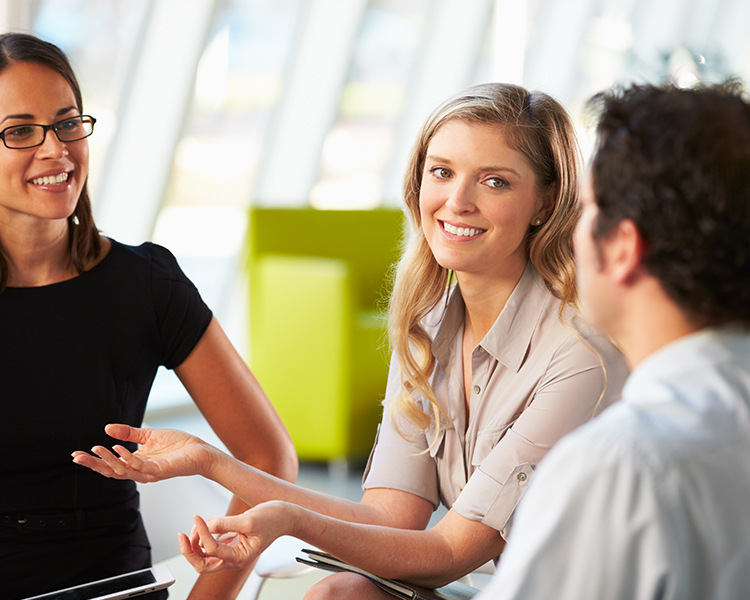 On this page you can read about recent changes, deadlines and information regarding finance, payroll and HR.

Registration of beneficial owners must be registered before 1st December 2017

By the 23 May 2017 the Danish Business Authority has implemented a new shareholder register. This register implies registration of the company’s beneficial owner(s). A beneficial owner is always a natural person who ultimately owns or controls a legal entity through direct or indirect ownership of a sufficient percentage of the shares or voting rights or ownership interests in that entity or through control by other means.

As a rule of thumb control or ownership of more than 25 % of the shares or voting rights in a legal entity constitutes “a sufficient percentage”. A smaller part of the shareholding or voting rights may also constitute “a sufficient percentage” if the smaller part in fact controls the legal entity. Therefore, a legal entity might have more than one beneficial owner, all of whom must be identified and registered.

Among other Danish private and public limited companies (ApS and A/S) as well as entrepreneurial companies (IVS) will be subject to register the beneficial owners. Danish partnerships (I/S) are also obliged to register.

The legal entities must make all reasonable efforts to identify their beneficial owners and they must keep records of the actions taken for the identification for five years.

If you need assistance to identify and/or register the beneficial owners, please contact your Azets consultant. We can assist you with the identification and registration at the Danish Business Authority.

Registration of beneficial owners must be registered before 1st December 2017.

Who is RUT, and why should you know RUT

The current rules and requirements for registration of foreign businesses and foreign labour in Denmark (known as the RUT register) were tightened on 18 June 2016.

Foreign businesses or self-employed earners are under a duty to notify the Danish authorities of their work. The notification must be submitted to RUT, which is the Kingdom of Denmark’s official Register for Foreign Service Providers.

Danish private individuals and Danish businesses hiring foreign labour are required to request documentation to verify that the foreign business is duly registered with RUT. The assignor is obliged to report any non-registration to the Danish Working Environment Authority if the assignor has not been presented with such statutory documentation within three days of the commencement of employment.

Non-registration as well as non-fulfilment of the duty to request the submission of documentation is punishable with a fine, and Danish assignors (businesses and private individuals alike) risk incurring fines of up to DKK 10,000.

However, various exceptions apply where notification to RUT is not mandatory, for instance in case of participation in conferences in Denmark, including as a teacher/lecturer, short business trips, athletics or special fitting assignments.

Azets' HR Legal Department has broad experience in this area and offers to provide assistance with inpatriation and expatriation of employees and to assume responsibility for notifications to RUT for foreign businesses and individuals operating in Denmark.

Change frequency for reporting of "EU sales exclusive of VAT"

Tax authorities has wrongly changed the frequency for reporting “EU sales exclusive of VAT” for some companies from quarterly to monthly.

Therefore, we recommend that companies that have previously reported quarterly verify whether they have been affected by the error in SKAT´s system and, if necessary, change it back. If Azets takes care of the reporting of VAT and “EU sales exclusive of VAT”, we will manually correct the error.

Select VAT (Moms) > EU sales exclusive of VAT (EU-slag uden moms) > Skift Indberetningsfrekvens. You will then be able to see the current frequency and request a change of it. See below. If you request quarterly frequency, and this cannot be done due to that the company doesn’t apply to the rules for quarterly filing, you will be notified when clicking on the ”Skift frekvens” button. 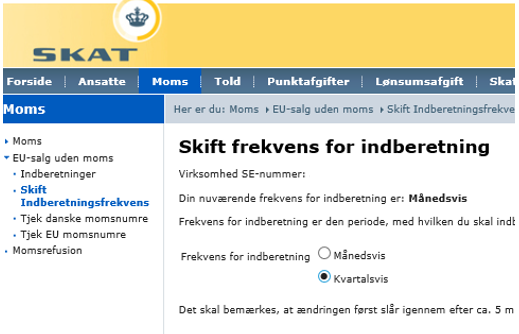 The ordinary advance tax installments must be paid on March 20 and November 20, respectively.

If the company forms part of a joint assessment, the total advance tax must be paid by the administrating company.

Companies with an expected low income in 2017 may ask SKAT for a reduction in the ordinary advance tax. This can be done online via Self-service Business on SKAT’s website, and the request can be made right up until the deadline for payment of the first and second installments.

If it is estimated that the ordinary advance taxes are insufficient to cover the actual taxes for the 2017 year, the company may make additional voluntary payments. This can be an advantage because by doing so, the company avoids having to pay a non-deductible outstanding tax penalty, which was 3.4% for the tax year 2016.

The tax account is an account statement showing all transactions between SKAT (the Danish Customs and Tax Administration) and the business. It is also possible for the business to see any amounts that have been referred to the debt collection department at SKAT.

We recommend businesses to reconcile the tax account regularly to ensure consistency with their bookkeeping records in terms of debit and credit balances with SKAT (VAT, A tax (tax deducted from income at source), corporation tax, other taxes and duties, interest, fees, charges, etc.).